Hi All, Just wanted to share some insight on auditioning today. I just did a voice over job on an international film that’s going to be a blockbuster.  It’s scheduled to premier this summer. I signed a Non Disclosure agreement so I can’t mention the name of film but I did record in this amazing facility that helped to produce a few oscar winners.

As an actor, you must audition. It’s an emotional roller coaster but this is the only way to get jobs. You reveal your soul to strangers and most of the time you get rejected. It’s tough on the ego. But, actors must develop a healthy attitude about the audition process otherwise we will not succeed in this crazy business. One thing I’ve always done was simply be nice to people and expect nothing in return. I always greet the people in the room warmly, try my best during the audition then  expressing sincere gratitude for seeing me on the way out. Casting directors are very busy people. For roles I can play, they probably see more than 40 actors. Whether you get the job depends on many things, oftentimes it’s something you have no control over like age or look. However, the one thing you can control is your attitude. Being positive can’t hurt. Be nice, be open, be someone they want to work with. I auditioned for a casting director for a voice acting role several weeks ago but was not right for the part. When this recent job came up, he remembered me. He called my agent to specifically ask for me.  Of course I had to audition again since it was an entirely different part but I like to think that being gracious had  something to do with me getting this job this time. Again, it couldn’t have hurt.

Be nice folks, you never know who is listening.

Hey Folks, I made it on The Knick’s preview trailer of Season 1. Can’t wait to binge on Max Go!

Hey Folks, I was cast in this GAP Holiday add directed by Sofia Coppola. It should be airing any day now. She was such a wonderful, easy and cool person to work with.

Ping Wu (Perry Yung) hasn’t been in The Knick very often this season, though he owns the opium den — and the prostitute — that Dr. Thackeray frequents. Imagine my surprise, then, when he got to perform The Most Awesome scene of the finale and say the Best Line of the entire series.

Hospital Director Barrow (Jeremy Bobb), deeply in dept to gangster Bunky Collier (Danny Hoch), goes to Wu, ostensibly in Thackeray’s name, asking that Collier be killed. Of course, the only way to get to Collier is to get rid of all his henchmen first. Though a bit incredulous that Thackeray has sent Barrow to speak for him when Thackeray and Wu have their own relationship, Wu seems to take Barrow’s word and request at face value. 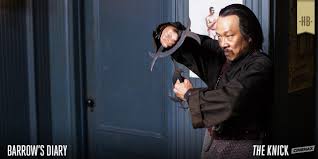 Wu is so marvelous that Bunky and his henchmen can’t even gather their wits let alone their weapons. Soft-spoken Ping Wu barrels in like a tornado or a typhoon or a hurricane, only worse and faster than all three combine, demolishing the “guards” and leaving Bunky with an unfired pistol in his hand and a hatchet in his forehead. 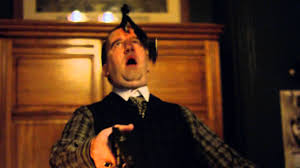 After reading about the massacre in the newspaper, Barrow cockily returns to his own office at The Knick, confident that all evidence of his $9K debt to Bunky has been metaphorically erased. There, he finds Wu sitting at Barrow’s desk, paging through Bunky’s ledger, remarking that anyone who owed Wu $9K as long as Barrow had owed it to Bunky would have been fed to Wu’s pigs long ago. Barrow protests, something to the effect that the ledger is not what it seems. Ping Wu then incisively retorts with the very best line of the entire season: “I can read left to right, not just up and down.”

Sai Wing Mock, leader of the Hip Sing Tong in New York City’s Chinatown, survived repeated attempts on his life and wore a chain mail vest. He was named by the press the “Clay Pigeon of Chinatown” and the “Mayor of Chinatown”. During several attempts on his life, Mock Duck reportedly squatted down in the street and fired at his attackers with two handguns with his eyes closed.

The great thing about Michael Begler and Jack Amiel , the writers of The Knick, is they do great research so that the actors have authentic material to work from. This enriches all aspects of the production immensely.

Hi Folks, I don’t think it’s official but the Ping Wu assassination scene is up on youtube!

It seems that Ping Wu is gettin some internet buzz on Twitter:

Love the deliberate nature of Perry Yung (Ping Wu). That’s all him, we didn’t write it that way, he made it so specific.

Ping Wu is now my most favourite character on The Knick. What a bad ass.

@andygreenwald please get on board my campaign for Ping Wu spin off series from @AtTheKnick. Working title – The Ping: Rise of a Footsoldier

The best part of the 1st season of @AtTheKnick was the two minutes it turned into an insane kung fu movie. Ping Wu spin off series please?

Ping Wu is the newest superhero on TV and all from one scene! #TheKnick

@MichaelBegler @JackAmiel @AtTheKnick Guys, that final episode with Ping Wu was fucking awesome. Can we get a whole show about that guy?

Here’s a shot from The Knick’s Official Tumblr page!

http://www.ign.com/articles/2014/10/18/the-knick-crutchfield-review?abthid=5441d7c3bb5d52bb2100002e
The only story that came close to putting a smile on my face was Barrow’s tale. Barrow, who rightfully got c***punched at the top of the episode, and then tried to use “Thackery’s debt” to pay for a gangland hit on Collier. Didn’t work though. And now Barrow’s debt’s been picked up by Ping Wu, who found Collier’s ledger. And not only is Ping Wu more of a physical threat than Collier (at least on his own, as he managed to take out five guys, including Collier, in fifteen seconds) but he flat-out said that he would have fed someone like Barrow to his pigs long ago. So that handily provided the crowd-pleasing moment of “Crutchfield.”
http://tvrecaps.ew.com/recap/knick-season-1-episode-10/3/
Enter the Ping Wu plan, which Thackery—cackling in his drug mania—advises against: “You’re talking about bargaining with the devil, Herman.” On Barrow’s pretense that Thackery wants Collier dead, the assassin enters Collier’s den and slaughters the tenderloin district boss and three members of his crew. Barrow is glad to read about the deaths in the paper, but when he gets to his office, Wu is there. Wu looks over Collier’s accounts book and says, “A man who owes me $9,000 as long as you owe Collier would be fed to my pigs…This, my book now”—setting up a “the devil you know” regret-filled season 2 for Barrow.
http://www.hitfix.com/whats-alan-watching/season-finale-review-the-knick-crutchfield-uncomfortably-numb
Not every bad-to-worse story of “Crutchfield” was specifically medicine-related, though I suppose Barrow did need to have his groin treated after being abused for the final time by Bunky Collier. But in going to Ping Wu to escape his debt — which allowed Steven Soderbergh to flex his “Haywire” muscles with a brief but memorable action sequence — our resident weasel has elected for his own cocaine-to-heroin transition.
Read more at http://www.hitfix.com/whats-alan-watching/season-finale-review-the-knick-crutchfield-uncomfortably-numb#ReGJrMvRdh6Fl4Ro.99
https://www.rollingstone.com/tv/recaps/the-knick-season-finale-recap-take-two-aspirin-20141017

Then there’s Herman, for whom the phrase, “Nothing breaks a man like a good cock punch,” has never been more prophetic. After one of Bunky’s goons delivers the aforementioned jab to the crotch, the hospital administrator hatches a plan to rid himself of the loan shark by enlisting Ping Wu to kill him, passing it off as fulfillment of a debt to Thackery. Whether the ensuing assassination sequence, also reminiscent ofThe Godfather, plays as accurate or ludicrous will be left for another time (to begin, google Sai Wing Mock), but there’s no denying the entertainment value of a good ole chainmail n’ hatchet action scene. Naturally, Herman being Herman, the whole escapade only makes things worse, since he’s now indebted to a homicidal kung fu master.

Herman. Still $9,000 in debt to Bunky Collier, Herman Barrow was interrupted in the middle of sex, yelled at and, for good measure, punched in the groin. In desperation he went to Ping Wu, the pimp and opium dispenser who owed Thackery his life, and told him that Thackery wanted Bunky dead. In a scene that was just a little over the top, Ping appeared at Bunky’s office, slashed his underlings’ throats and threw an ax that split Bunky’s forehead. He then appeared at Herman’s office where he announced that he had found Bunky’s account book and knew that the debt was Herman’s. So now Herman owes Ping the $9,000.

Desperate Herman Barrow (Jeremy Bobb) lied and told Ping Wu (Perry Yung) that Thackery wanted Bunky Collier (Danny Hoch) dead…in an effort to enlist him to do the killing. And that he did. In one fell swoop, Ping killed several of Collier’s henchmen, ending promptly with an axe to the pimp’s forehead. [Ping Wu is an excellent character that I hope the creators will bring back next season. I personally want to know more about him, his life and the opium culture at this time in history.]

Up to his balding dome in debt to Bunky Collier, he turns to Ping Wu (Perry Yung) – the man who owns the opium den Thack regularly visits – to try a more drastic solution. It’s undoubtedly the most insane plot turn the series has tried so far, but it works because of Yung’s deft theatrical touch…

Wow! I totally enjoyed watching Crutchfield – the final episode of the Knick.

Here are a few reviews that mentions my character Ping Wu:

“Wu is as awesomely terrifying as he is overly exoticized. As intoxicating as it is, the Wu scenes are a little ‘30s serial.” – By Brandon Nowalk, A.V. Club

“Wu moves through the offices with the skill of a surgeon, slicing throats, perforating internal organs, and finally planting a hatchet into Collier’s face from across the room. He’s efficient and effective in a way Thack and Edwards are on their best days, but what set’s Wu apart is his goal: he actually wants his patients to die.

Perhaps there’s something to be said for Wu’s expediency, both in terms of how he flips the script on Barrow and how he doesn’t let anyone suffer…